Apple Has Earned a Customer for Life

I used to think that when people talked about the “legendary Apple customer service” that there was plenty of hyperbole thrown in for good measure.  Until it happened to me with my broken MacBook Pro hinge.

When the screen on my late 2008 15” MacBook Pro started separating from the hinge, the first thing I did was search Google.  There I found more than enough search results to make me believe this was a widespread issue with this vintage of laptop.  And since the laptop was out of warranty, most of the results talked about re-gluing the aluminum screen cover to the hinge.

After trying to re-attach the hinge to the screen using epoxy, I headed over to the Apple store in King of Prussia, PA.  To say this first encounter at the Genius Bar was frustrating is an understatement.

Apple “Geniuses” and fanboys alike are very big on pushing the AppleCare warranty, selling you with tales that Apple will fix anything in that extended time period.  While that may be true, extended warranties generally don’t pay off for the consumer, and as such, I don’t buy them.

Not that it would have mattered for me anyway.  My MacBook Pro is well beyond 3 years old, one of the first unibody models that came out.  You think the Apple “Genius” would’ve known that after checking the serial number, but instead just kept repeating robotically:

Even when I asked, “A glue failure doesn’t seem like a manufacturers defect?” or “I should’ve paid $349 for an extended warranty to protect against $0.05 of faulty glue?”

At that point, after being asked if I dropped the laptop, given a series of robotic answers, suggested that I should’ve spend $349 that wouldn’t have fixed my problem, and generally treated like a monkey, I felt like smashing the laptop right on the Genius Bar just to make a scene.  Instead, I walked out feeling worse than when I arrived, with crippled MacBook Pro in hand.

Since I wasn’t going back for a second round of stupidity at King of Prussia Apple Store, I decided to look up an independent shop to see what the cost of repair would be.  The repair guy immediately said “Oh, I’ve seen this a few times recently…it’s probably around $500-$600 to fix.”

One more trip to the Apple Store

Several weeks had passed and my laptop became pretty much unusable.  I decided to bite the bullet and pay to get the screen fixed.  I also decided to go back to an Apple Store (this time, in Ardmore, PA) to have them fix it.  I figured if I’d have to pay, might as well guarantee it would get fixed properly.

When I walked up to the Genius Bar, the Apple “Genius” still asked me if I dropped my laptop (sidebar:  Is this part of the mind tricks they give everyone?  There isn’t a scratch on the thing, let alone any dents).  After the Apple employee looked over the laptop, I told him in my most dejected voice that I wanted to find out how much is was to replace the screen.

I damn near fell off the stool I was sitting on.  How could the Apple Store in King of Prussia been so unhelpful, and then 5 minutes into the same explanation I get an offer to get the screen fixed FREE at the Suburban Square Apple Store in Ardmore?

Apple Genius:  “And we can probably get this back to you by tomorrow.”

Needless to say, I didn’t want to do anything except hit ‘Accept’ on the electronic repair form.  I’ve come too far to mess this gift up!

Maybe I got lucky.  Maybe it was perseverance.  Maybe this screen/hinge defect has shown up too many times in the last six weeks and Apple could no longer ignore it.

Maybe it’s because I asked twice at two different Genius appointments. Or maybe Apple has realized I’ve spent several thousand dollars with them in the past several years, with this MacBook Pro, iMac, several iPhones and an iPad.  That level of spend probably doesn’t even get me in the top 50% of non-business customers, but it’s not negligible either.

Whatever the reason, by comping me the $492.41, Apple has “bought” themselves a customer for life. 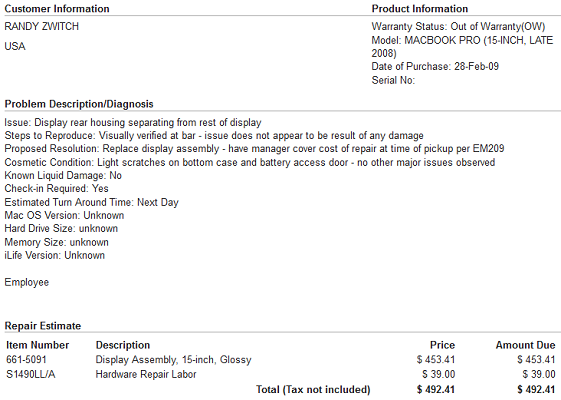 Edit: To read the follow-up of what eventually ended up of this MacBook Pro, click here for an article about me replacement battery interaction with Apple.