Last week, version 1.4 of RSiteCatalyst was released, and now it’s possible to get site pathing information directly within R. Now, it’s easy to create impressive looking network graphs from your Adobe Analytics data using RSiteCatalyst and d3Network. In this blog post, I will cover simple and force-directed network graphs, which show the pairwise representation between pages. In a follow-up blog post, I will show how to visualize longer paths using Sankey diagrams, also from the d3Network package.

Although the QueuePathing() function is new to RSiteCatalyst, its syntax should feel familiar (even with all of the breaking changes we made!). In the case of creating our network graphs, we want to download all pairwise combinations of pages, which is easy to do using the ::anything:: operator:

Because we are using a pathing pattern of ("::anything::", "::anything::"), the data frame that is returned from this function will have three columns: step.1, step.2 and count, which is the number of occurrences of the path.

Before jumping into the plotting, we need to do some quick data cleaning. Lines 1-5 below are optional; I don’t set the Adobe Analytics s.pageName on each of my blog pages (a worst practice if there ever was one!), so I use the sub() function in Base R to strip the domain name from the beginning of the page. The other data frame modification is to remove the 'Entered Site' and 'Exited Site' from the pagename pairs. Although this is important information generally, these behaviors aren’t needed to show the pairwise relationship between pages.

Running the above code results in the following graph:

Hmmm…looks like a blob of spaghetti, a common occurrence when creating graphs. We can do better.

Pruning Edges From The Graph

There are many complex algorithms for determining how to prune edges/nodes from a network. For the sake of simplicity, I’m going to use a very simple algorithm: each path has to occur more than 5 times for it to be included in the network. This will prune roughly 80% of the pairwise page combinations while keeping ~75% of the occurrences. This is simple to do using the subset() function in R:

The result of pruning the number of edges is a much less cluttered graph:

Even with fewer edges in the graph, we still lose some of the information about the pages, since we don’t know what topics/groups the pages represent. We can fix that using a slightly more complex version of the d3Network graph code.

The graphs above outline the structure of randyzwitch.com, but they can be improved by adding color-coding to the nodes to represent the topic of the post, as well as making the edges thicker/thinner based on how frequently the path occurs. This can be done using the d3ForceNetwork() function like so:

Running the code results in the following force-directed graph:

I’m not going to lie, all three of these diagrams are hard to interpret. Like wordclouds, network graphs can often be visually interesting, yet difficult to ascertain any concrete information. Network graphs also have the tendency to reinforce what you already know (you or someone you know designed your website, you should already have a feel for its structure!).

However, in the case of the force-directed graph above, I do see some interesting patterns. Specifically, there are a considerable number of nodes that aren’t attached to the main network structure. This may be occurring due to my method of pruning the network edges. More likely is that these disconnected nodes represent “dead-ends” in my blog, either because few pages link to them, there are technical errors, these are high bounce-rate pages or represent one-off topics that satiate the reader.

In terms of action I can take, I can certainly look up the bounce rate for these disconnected pages/nodes and re-write the content to make it more ‘sticky’. There’s also the case of the way my “Related Posts” plugin determines related pages. As far as I know, it’s quite naive, using the existing words on the page to determine relationships between posts. So one follow-up could be to create an actual recommender system to better suggest content to my readers. Perhaps that’s a topic for a different blog post.

Regardless of the actions I’ll end up taking from this information, hopefully this blog post has piqued some ideas of how to use RSiteCatalyst in a non-standard way, to extend the standard digital analytics information you are capturing with Adobe Analytics into creating interesting visualizations and potential new insights.

For those of you who aren’t Adobe Analytics customers (or are, but don’t have API access), here are the data from the queue_pathing_pages data frame above. Just read this data into R, then you should be able to follow along with the d3Network code.

It felt like it would never happen, but RSiteCatalyst v1.4 is now available on CRAN! There are numerous changes in this version of the package, so unlike previous posts, there won’t be any code examples.

THIS VERSION IS ONE BIG BREAKING CHANGE

While not the most important improvement, it can’t be stressed enough that migrating to v1.4 of RSiteCatalyst is likely going to require re-writing some of your prior code. There are numerous reasons for the breaking changes, including:

Of the changes listed above, I think #2 and #3 are the biggest benefit to end-users of RSiteCatalyst. The codebase is now much cleaner and more consistent in terms of the keyword arguments, has better error handling, and having a second person helping maintain the project has led to a better overall package.

Probably the most useful improvement to RSiteCatalyst comes from those breaking changes by Adobe, which is the inclusion of Pathing and Fallout reports! I can’t say with absolute certainty, but I think with these two additional reports, the API is pretty much at parity to the Adobe Analytics interface itself. So now you can create your funnels using ggplot2, make force-directed graphs or Sankey charts using d3Network or just simple reporting of top ‘Next Pages’ and the like.

For those of you who don’t have OAuth credentials setup yet, the “legacy” version of authentication is still available in RSiteCatalyst.

Finally, there is now additional functionality on the descriptive side, as you can now download which Classifications are defined for a report suite, segments can be defined inline (i.e. from R) for the ‘Queue’ reports using the BuildClassificationValueSegment() function and functions that existed in previous versions of RSiteCatalyst tend to have more options defined than in previous versions.

Summary/We Want To Hear From You

While this new version of RSiteCatalyst has some annoying breaking changes, overall the package is much more robust than prior versions. I think the increase in functionality is well worth the minor annoyance of re-writing some code. Additionally, eventually Adobe will deprecate v1.3 of their API, so it’s better to move over sooner rather than later.

But for all of the improvements that have been made, there’s always room for improvement, whether it’s fixing unforeseen bugs, adding new features, improving the documentation or anything else. For all suggestions, bug fixes and the like, please submit them to the GitHub repository so that myself and Willem can evaluate and incorporate them. We’re also VERY open to any of you in the R community who are able to patch the code or add new features. As a friend in the data science community says, a Pull Request is always better than a Feature Request 🙂

It often doesn’t take much to get me off track, and on a holiday weekend…well, I was just begging for a fun way to shirk. Enter Harlan Harris:

Hey, I’m someone looking for something to do! And I like writing Julia code! So let’s have a look at recreating this diagram in Julia using VennEuler.jl (IJulia Notebook link): Because VennEuler.jl is not in METADATA as of the time of writing, instead of using Pkg.add() you’ll need to run:

Note that VennEuler uses some of the more exotic packages (at least to me) like NLopt and Cairo, so you might need to have a few additional dependencies installed with the package.

The data was a bit confusing to me at first, since the percentages add up to more than 100% (people could vote multiple times). In order to create a dataset to use, I took the percentages, multiplied by 1000, then re-created the voting pattern. The data for the graph can be downloaded from this link.

With a few modifications, I basically re-purposed Harlan’s code from the package test files. The circle result is as follows: 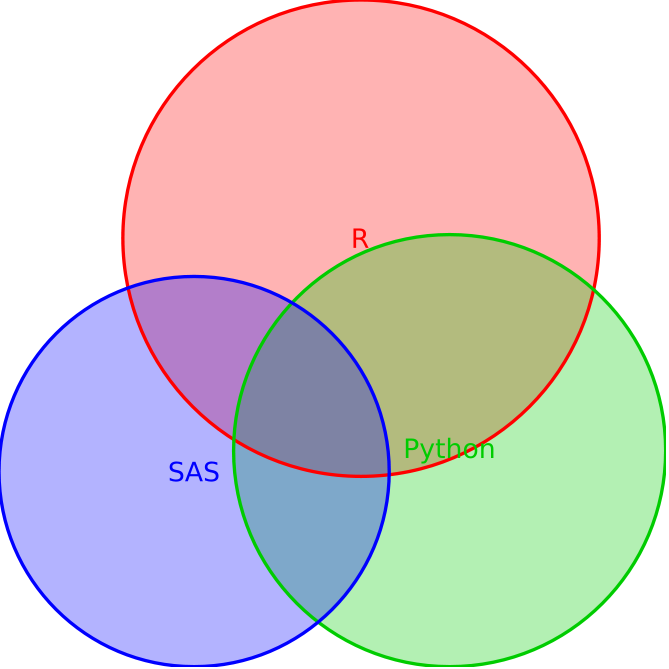 Since the percentage of R, SAS, and Python users isn’t too dramatically different (49.81%, 33.42%, 40.97% respectively) and the visualizations are circles, it’s a bit hard to tell that R is about 16% points higher than SAS and 9% points higher than Python.

Alternatively, we can use rectangles to represent the areas: 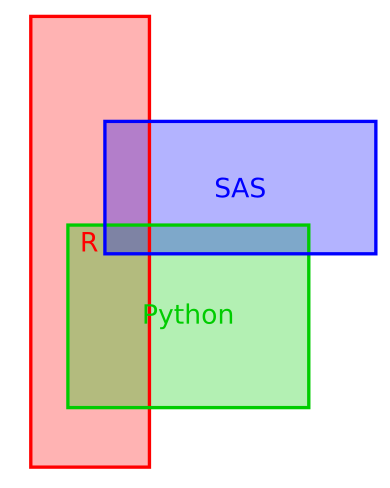 Here, it’s a slight bit easier to see that SAS and Python are about the same area-wise and that R is larger, although the different dimensions do obscure this fact a bit.

If I spent more time with this package, I’m sure I could make something even more aesthetically pleasing. And for that matter, it’s still a pre-production package that will no doubt get better in the future. But at the very least, there is a way to create an area-proportional representation of relationships using VennEuler.jl in Julia.