As digital marketers & analysts, we’re often asked to quantify when a metric goes beyond just random variation and becomes an actual “unexpected” result. In cases such as A/B..N testing, it’s easy to calculate a t-test to quantify the difference between two testing populations, but for time-series metrics, using a t-test is likely not appropriate.

To determine whether a time-series has become “out-of-control”, we can use Exponential Smoothing to forecast the Expected Value, as well as calculate Upper Control Limits (UCL) and Lower Control Limits (LCL). To the extent a data point exceeds the UCL or falls below the LCL, we can say that statistically a time-series is no longer within the expected range. There are numerous ways to create time-series models using R, but for the purposes of this blog post I’m going to focus on Exponential Smoothing, which is how the anomaly detection feature is implemented within the Adobe Analytics API.

There are three techniques that the Adobe Analytics API uses to build time-series models:

The formulas behind each of the techniques are easily found elsewhere, but the main point behind the three techniques is that time-series data can have a long-term trend (Double Exponential Smoothing) and/or a seasonal trend (Triple Exponential Smoothing). To the extent that a time-series  has a seasonal component, the seasonal component can be additive (a fixed amount of increase across the series, such as the number of degrees increase in temperature in Summer) or multiplicative (a multiplier relative to the level of the series, such as a 10% increase in sales during holiday periods).

The Adobe Analytics API simplifies the choice of which technique to use by calculating a forecast using all three methods, then choosing the method that has the best fit as calculated by the model having the minimum (squared) error. It’s important to note that while this is probably an okay model selection method for detecting anomalies, this method does not guarantee that the model chosen is the actual “best” forecast model to fit the data.

Once the function call is run, you will receive a DataFrame of ‘Day’ granularity with the actual metric and three additional columns for the forecasted value, UCL and LCL.  Graphing these data using ggplot2 (Graph Code Here - GitHub Gist), we can now see on which days an anomalous result occurred: 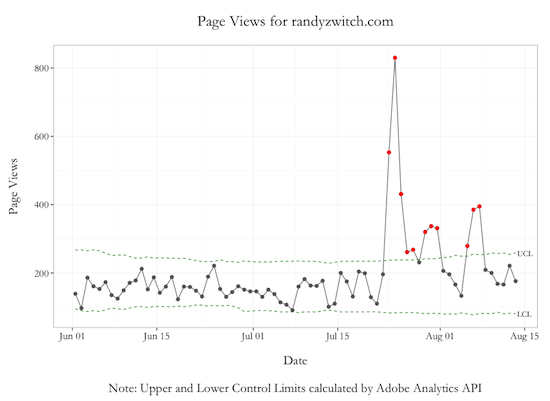 The red dots in the graph above indicate days where page views either exceeded the UCL or fell below the LCL. On July 23 - 24 timeframe, traffic to this blog spiked dramatically due to a blog post about the Julia programming language, and continued to stay above the norm for about a week afterwards.

There two limitations to keep in mind when using the Anomaly Detection feature of the Adobe Analytics API:

In neither case do I view these limitations as dealbreakers. The first limitation is just an engineering decision, which I’m sure could be expanded if enough people used this functionality.

For the time period of 35 days to build the forecasts, this is an area where there is a balance between calculation time vs. capturing a long-term and/or seasonal trend in the data. Using 35 days as your time period, you get five weeks of day-of-week seasonality, as well as 35 points to calculate a ‘long-term’ trend. If the time period is of concern in terms of what constitutes a ‘good forecast’, then there are plenty of other techniques that can be explored using R (or any other statistical software for that matter).

I have to give a hearty ‘Well Done!’ to the Adobe Analytics folks for elevating the discussion in terms of digital analytics. By using statistical techniques like Exponential Smoothing, analysts can move away from qualitative statements like “Does it look like something is wrong with our data?” to  actually quantifying when KPIs are “too far” away from the norm and should be explored further.

Reading a file into an array using readdlm

The most basic way to read data into Julia is through the use of the readdlm function, which will create an array:

If you are reading in a fairly normal delimited file, you can get away with just using the first two arguments, source and delim:

It’s important to note that by only specifying the first two arguments, you leave it up to Julia to determine the type of array to return. In the code example above, an array of type Any is returned, as the .csv file I read in was not of homogenous type such as Int64 or String. If you know for certain which type of array you want, you specify the data type using the type argument:

It’s probably the case that unless you are looking to do linear algebra or other specific mathy type work, you’ll likely find that reading your data into a DataFrame will be more comfortable to work with (especially if you are coming from an R, Python/pandas or even spreadsheet tradition).

To write an array out to a file, you can use the writedlm function (defaults to comma-separated):

Reading a file into a DataFrame using readtable

From what I understand, in the future you will be able to read files directly from Amazon S3 into a DataFrame (this is already supported in the AWS package), but for now, the DataFrames package works only on local files. Writing a DataFrame to file can be done with the writetable function:

By default, the writetable function will use the delimiter specified by the filename extension and default to printing the column names as a header.

The third major way of importing tabular data into Julia is through the use of ODBC access to various databases such as MySQL and PostgreSQL.

The Julia ODBC package provides functionality to connect to a database using a Data Source Name (DSN). Assuming you store all the credentials in your DSN (server name, username, password, etc.), connecting to a database is as easy as:

Of course, if you don’t want to store your password in your DSN (especially in the case where there are multiple users for a computer), you can pass the usr and pwd arguments to the ODBC.connect function:

Alternatively, you can build your own connection strings within a Julia session using the advancedconnect function:

Regardless of which way you connect, you can query data using the query function. If you want your output as a DataFrame, you can assign the result of the function to an object. If you want to save the results to a file, you specify the file argument:

Overall, importing data into Julia is no easier/more difficult than any other language. The biggest thing I’ve noticed thus far is that Julia is a bit less efficient than Python/pandas or R in terms of the amount of RAM needed to store data. In my experience, this is really only an issue once you are working with 1GB+ files (of course, depending on the resources available to you on your machine).

Edit 3/25/2016: A much more up-to-date method of reading CSV data into Julia can be found at this blog post by Clinton Brownley.

In a previous rant about data science & innovation, I made reference to a problem I’m having at work where I wanted to classify roughly a quarter-billion URLs by predicted website content (without having to actually visit the website). A few colleagues have asked how you go about even starting to solve a problem like that, and the answer is massively parallel processing.

In order to classify the URLs, the first thing that’s needed is a customized dictionary of words relative to our company’s subject matter. When you have a corpus of words that are already defined (such as a digitized book), finding the population of words is relatively simple: split the text based on spaces & punctuation and you’re more or less done. However, with a URL, you have one continuous string with no word boundaries. One way to try and find the boundaries would be the following in Python:

The problem with approaching the word searching problem in this manner is you are limited to the power of your local machine. In my case with a relatively new MacBook Pro, I can process 1,000 lines in 19 seconds as a single-threaded process. At 250,000,000 URLs, that’s 4.75 million seconds…197,916 minutes…3,298 hours…137 days…4.58 months!  Of course, 4.58 months is for the data I have now, which is accumulating every second of every day. Clearly, to find just the custom dictionary of words, I’ll need to employ MANY more computers/tasks.

One thing you might notice about the Python code above is that the two loops have no real reason to be run serially; each comparison of URL and dictionary word can be run independently of each other (often referred to as “embarrassingly parallel”). This type of programming pattern is one that is well suited to running on a Hadoop cluster. With Amazon ElasticMapReduce (EMR), we can provision tens, hundreds, even thousands of computer instances to process this URL-dictionary word comparison, and thus getting our answer much faster. The one downside of using Amazon EMR to access Hadoop is that EMR expects to get a Java ``.jar` file containing your MapReduce code. Luckily, there is a Python package called MRJob that does the Python-to-Java translation automatically, so that users don’t have to switch languages to get massively parallel processing.

The Python code above, keeping a tally of words & number of occurrences IS a version of the MapReduce coding paradigm. Going through the looping process to do the comparison is the “Map” portion of the code and the sum of the word values is the “Reduce” step. However, in order to use EMR, we need to modify the above code to remove the outer URL loop:

The reason why we remove the outer loop that loops over the lines of the URL file is because that is implicit to the EMR/Hadoop style of processing. We will specify a file that we want to process in our Python script, then EMR will distribute the URLs file across all the Hadoop nodes. Essentially, our 250,000,000 million lines of URLs will become 1,000 tasks of length 250,000 urls (assuming 125 nodes of 8 tasks each).

Once we have our Python MRJob code written, we can submit our code to EMR from the command line. Here’s what an example code looks like:

There are many more options that are possible for the MRJob package, so I highly suggest that you read the documentation for EMR options. One thing to also note is that MRJob uses a configuration file to host various options for EMR called “runners”.  Yelp (the maker of the MRJob package) has posted an example of the mrjob.conf file with the most common options to use. In this file, you can specify your Amazon API keys, the type of instances you want to use (I use c1.xlarge spot instances for the most part), where your SSH keys are located and so on.

For the most part, you can expect linear performance in terms of adding nodes to your EMR cluster. I know at some point, Hadoop will decide that it no longer needs to add any more mappers/reducers, but I haven’t had the desire to find out exactly how many I’d need to add to get to that point! 🙂