Automated Re-Install of Packages for R 3.0

With the big release of R 3.0 today comes an unfortunate side effect of needing to re-install all of your packages. Luckily, R provides a pretty easy method of getting all of your packages into a list for automated re-install.  Here’s how to do it for OSX users with a default install to the Library:

For Windows users, the same general process should work, assuming you change the file reference in the installed.packages function to the proper Windows location. The one downside to this method is that only packages that are listed on CRAN will be reinstalled, so if you installed anything using devtools, you’ll need to re-install those packages again. But at the very least, the code snippet above is a quick way to re-install most of your packages. EDIT, 4/4/13: Per Noam below, you can also use a more direct method: update.packages(ask=FALSE, checkBuilt = TRUE)

For the last month or so I’ve been working on an R package to make accessing the Adobe (Omniture) Digital Marketing Suite Reporting API easier.  As part of this development effort, I’m at the point where I’m intentionally introducing errors into my function inputs, trying to guess some of the ways users might incorrectly input arguments into each function.  Imagine my surprise when I saw this:

The main idea behind the functions I’ve written is making REST calls to the Omniture API, which done correctly return valid JSON. From there, each JSON string is converted from binary or whatever formatting they come back as using the content function from the httr package. Without specifying any arguments to the content function, the function tries to guess at the proper translation method.

The guessing is all fine and good until you don’t pass a valid JSON string!  In this case, the error message is guessing that it might be XML (the returned error is actually HTML), tries to load the XML package…then says it can’t load the XML package. A two-for-one error!

Maybe it’s just me, but I’m finding this hilarious after a long day of programming. Maybe it’s because I’m not longer intimidated by an error like this, and as such, I’ve gotten over the steep learning curve of R.

Note:  Hadley, if you read this, I’m not saying your httr package has any sort of bug or anything. Just that I found this particular error amusing.

(not provided): Using R and the Google Analytics API 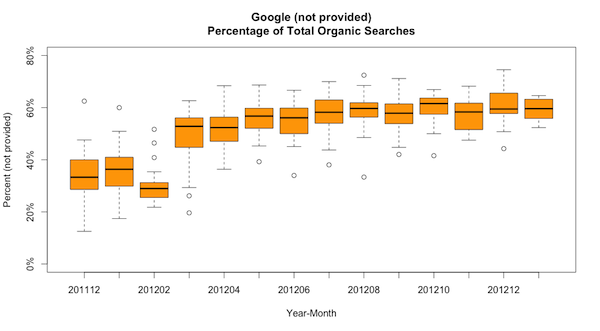 For power users of Google Analytics, there is a heavy dose of spreadsheet work that accompanies any decent analysis.  But even with Excel in tow, it’s often difficult to get the data just right without resorting to formula hacks and manual table formatting.  This is where the Google Analytics API and R can come very much in handy.

After you have your API access straightened out, the GitHub page for the rga package has all the details in how to authenticate using the rga.open function.  I chose to use the where argument so that I can continuously hit the API across many sessions without having to do browser authentication each time.

Analyzing (not provided) as a Google Analytics organic search term

The result of this API call provides an R data frame containing two columns: date and number of visits where the search term was “(not provided)”.

After pulling the data into R, all that’s left is to merge the data frames, do a few calculations, then make the boxplot.  Because the default object returned by the rga package is a data frame, it’s trivial to use the merge function in R to join the data frames, then use a few calculated columns to create the percentage of visits that are “(not provided)”

What was that Google, only 10% of searches are supposed to be (not provided)?

By now, it’s beating a dead horse that the percentage of “(not provided)” search results from Google FAR exceeds what they said it would.  This blog gets about 5,000 visits a month, and due to the technical nature of the blog many of the users are using Chrome (which does secure search automatically) or from iOS (which also does secure search).  But at minimum, this graph illustrates the power of using the Google Analytics API via R; I can update this graph at my leisure by running my script, and I can create a graphic that’s not possible within Excel.