Getting Started With OmniSci, Part 1: Docker Install and Loading Data

It’s been nearly five years since I wrote about Getting Started with Hadoop for big data. In those years, there have been incremental improvements in columnar file formats and dramatic computation speed improvements with Apache Spark, but I still wouldn’t call the Hadoop ecosystem convenient for actual data analysis. During this same time period, thanks to NVIDIA and their CUDA library for general-purpose calculations on GPUs, graphics cards went from enabling visuals on a computer to enabling massively-parallel calculations as well.

Building upon CUDA is MapD, an analytics platform that allows for super-fast SQL queries and interactive visualizations. In this blog post, I’ll show how to use Docker to install MapD Community Edition and load hourly electricity demand data to analyze.

While CUDA makes it possible to do calculations on GPUs, I wouldn’t go as far as to say it is easy, including just getting everything installed! Luckily, there is Docker and nvidia-docker, which provide all-in-one containers with all necessary drivers and libraries installed to build upon. MapD provides instructions for installing MapD CE using nvidia-docker, with the main installation command as follows:

When you kickoff this command (I’m using a ssh terminal into a remote Ubuntu desktop), Docker will download all the required images from the mapd/mapd-ce-cudarepository and start a background process for the MapD database and the Immerse visualization interface/web server:

Once all of the images are downloaded, you can find the container that was created using docker container ls, then run docker exec -it <container id> bash to start the container and drop you into a Bash shell (on the container). From this point, MapD Community Edition will be running!

Once the Bash shell opens in the terminal, you can now interact with MapD via the Docker container. However, for beginning exploration, it’s much simpler to use the Immerse Web Interface at localhost:9092: 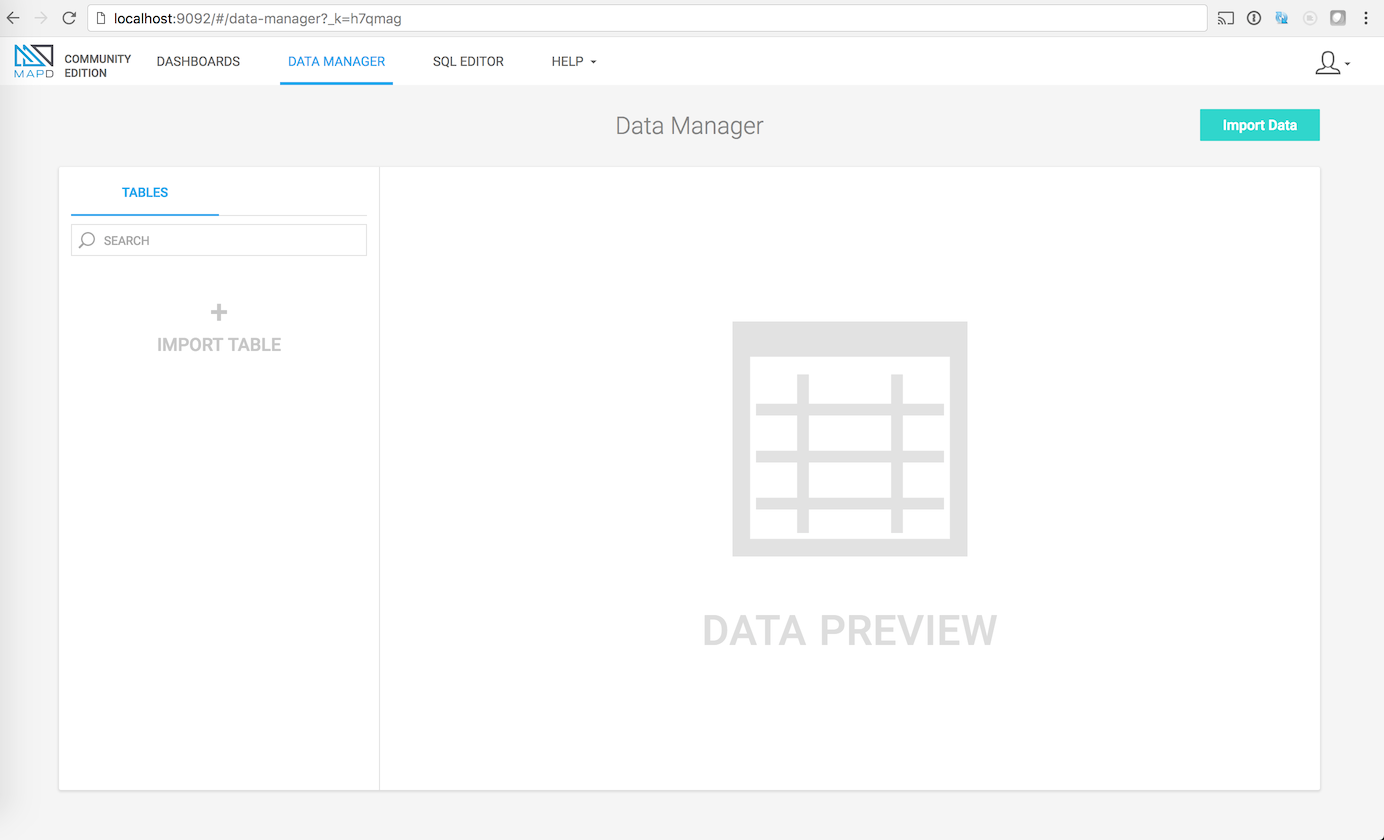 Uploading data via the Data Manager interface is reasonably performant for smaller files; a test file with four columns and million or so rows loaded in a few seconds (dependent on your upload speed, obviously): 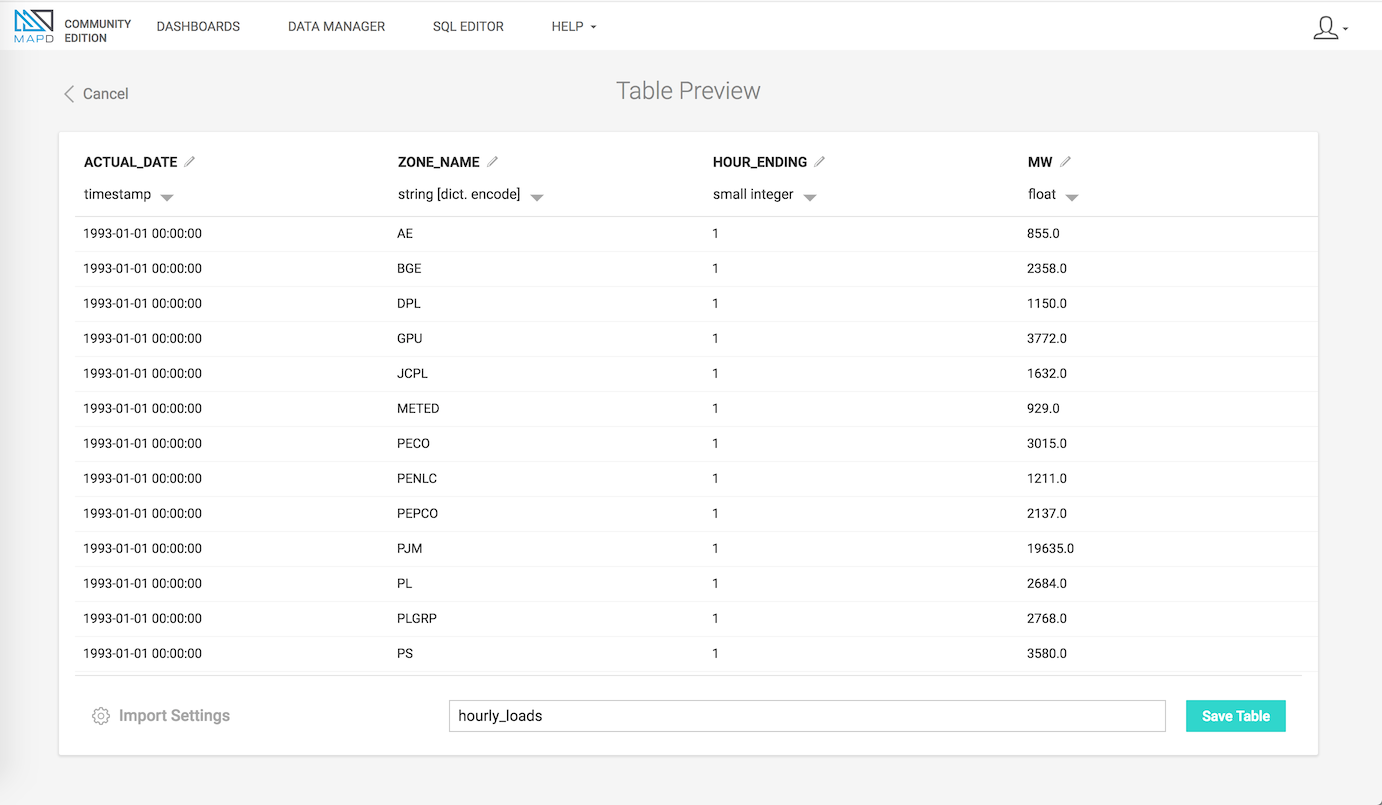 Edit the column names and types if you want (the CSV reader gets it right for me most of the time). Then, once the ‘Save Table’ button is clicked, MapD will import the CSV data into a columnar binary format, so that the GPU can operate directly on the data rather than reading from the CSV each query.

While browser GUIs are great for some things, I’m still very much a command-line guy, at least for things like loading data. MapD provides the mapdql interface to load data and query, very much like psql for Postgres and other databases. To load my 4.9 million * 4 column dataset, I used the following commands:

The DDL for MapD seems pretty much the same as every other database language. First you define a table’s columns and their types, then you can use the copy command to load data from a CSV. The statement that prints upon success begins to give an indication of the speed MapD provides, loading nearly 5 million records in less than a second.

Up this point, I’ve intentionally not described the data I uploaded into MapD; in my next post, I’ll cover the dataset I’m using and how I converted the data from Excel spreadsheets into a CSV. But before ending this post, I wanted to show a brief summary of the performance of MapD: 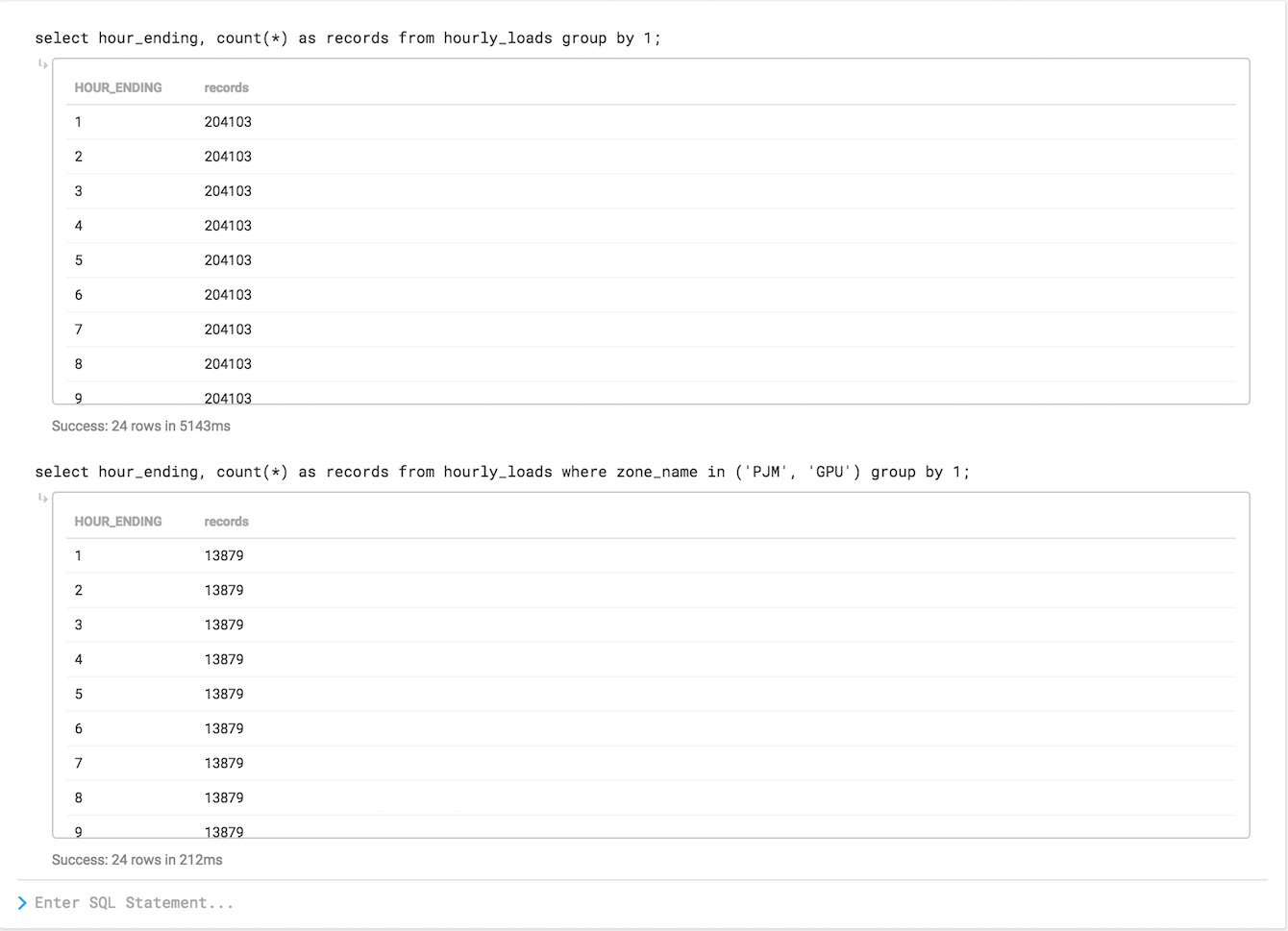 The first query shows a simple record count by the hour_ending dimension in my table, something you might run if you weren’t too familiar with the table. You’ll notice that running this group by across the 5 million row dataset took 5143ms, which isn’t so fast. What’s going on?

Because this is the first query from a cold start, MapD needs to load data into GPU RAM. So while the first query takes a few seconds, the second query displays a warmed-up level of performance: 212ms to scan 5 million rows, filter by a few values of the zone_name column, then grouping by hour_ending. For reference, a human blink takes 100-400 ms, so this second query quite literally finished in the blink of an eye…

This first blog post just scratched the surface on what is possible using just the Community Edition of MapD. In future blog posts, I will provide the code to create the dataset, do some basic descriptive statistics, and even do some analysis and dashboarding of historical electricity demand.

Per Todd Mostak from MapD, the second query would likely even run faster than 212ms, had I run it again:

Also fyi that 212ms query will likely run faster if you run it again (even changing the literals). MapD compiles queries the first time it sees a new query plan but then can reuse the same compiled code if you change literals (like for zone_name).

Julia has the reputation as a “fast” language in that it’s possible to write high-performing code. However, what I appreciate most about Julia is not just that the code is fast, but rather that Julia makes high-performance concepts accessible without having to have a deep computer science or compiled language background (neither of which I possess!)

For version 0.6 of Julia, another milestone has been reached in the “accessible” high-performance category: the ability to run Julia code natively on NVIDIA GPUs through the CUDAnative.jl package. While CUDAnative.jl is still very much in its development stages, the package is already far-enough along that within a few hours, as a complete beginner to GPU programming, I was able to see in excess of 20x speedups for my toy example to calculate haversine distance.

The CUDAnative.jl introduction blog post and documentation cover the installation process in-depth, so I won’t repeat the details here. I’m already a regular compile-from-source Julia user and I found the installation process pretty easy on my CUDA-enabled Ubuntu workstation. If you can already do TensorFlow, Keras or other GPU tutorials on your computer, getting CUDAnative.jl to work shouldn’t take more than 10-15 minutes.

To get a feel for what sort of speedup I could expect from using a GPU, I wrote a naive implementation of a distance matrix calculation in Julia:

The above code takes a pair of lat/lon values, then calculates the haversine distance between the two points. This algorithm is naive in that a distance matrix is symmetric (i.e. the distance between A to B is the same from B to A), so I could’ve done half the work by setting result[i,j] and result[j,i] to the same value, but as a measure of work for a benchmark this toy example is fine. Also note that this implementation runs on a single core, no CPU-core-level parallelization has been implemented.

Or to put all that another way: if someone wanted to tackle this problem without thinking very hard, the implementation might look like this.

There are two parts to the CUDAnative.jl implementation: the kernel (i.e. the actual calculation) and the boilerplate code for coordinating the writing to/from the CPU and GPU.

The kernel code has similarities to the CPU implementation, with a few key differences:

The coordination code is similar to what you might see in a main() function in C or Java, where the kernel is applied to the input data. I am using the dev keyword with the default value of CuDevice(0) to indicate that the code should be run on the first (in my case, only) GPU device.

The remainder of the code has comments on its purpose, primarily:

The code is written to process one row of the distance matrix at a time to minimize GPU memory usage. By writing out the results to the CPU after each loop iteration, I have n-1 extra CPU transfers, which is less performant than calculating all the distances first then transferring, but my consumer-grade GPU with 6GB of RAM would run out of GPU memory before completing the calculation otherwise.

The performance characteristics of the CPU and GPU calculations are below for various sizes of distance matrices. Having not done any GPU calculations before, I was surprised to see how much of a penalty there is writing back and forth to the GPU. As you can see from the navy-blue line, the execution time is fixed for matrices of size 1 to 1000, representing the fixed cost of moving the data from the CPU to the GPU.

There are myriad things I learned from this project, but most important is that GPGPU processing can be accessible for people like myself without a CS background. Julia isn’t the first high-level language to provide CUDA functionality, but the fact that the code is so similar to native Julia makes GPU computing something I can include in my toolbox today.

Over time, I’m sure I’ll get better results as I learn more about CUDA, as CUDAnative.jl continues to smooth out the rough edges, etc. But the fact that as a beginner that I could achieve such large speedups in just an hour or two of coding and sparse CUDAnative.jl documentation bodes well for the future of GPU computing in Julia.

This blog post will be fairly short, given the minor nature of the update.

Several users complained about OAUTH2 authentication not working, which I didn’t know because I usually use the legacy authentication method! Luckily, GitHub user leocwlau reported the issue AND provided the solution. No other bug fixes were made, nor was any additional functionality added.

So if you ran into an issue where your login no longer worked, version 1.4.13 of RSiteCatalyst should remedy the issue. Even if you hadn’t run into this authentication issue, users should still upgrade, as all updates are cumulative in nature.

As I’ve mentioned in many a blog post before this one, I encourage all users of the software to continue reporting bugs via GitHub issues, and especially if you can provide a working code example. Even better, a fix via pull request will ensure that your bug will be addressed in a timely manner and for the benefit to others in the community.

Note: Please don’t email directly via the email in the RSiteCatalyst package, it will not be returned. Having a valid email contact in the package is a requirement to have a package listed on CRAN so they can contact the package author, it is not meant to imply I can/will provide endless, personalized support for free.