String Interpolation for Fun and Profit

In a previous post, I showed how I frequently use Julia as a ‘glue’ language to connect multiple systems in a complicated data pipeline. For this blog post, I will show two more examples where I use Julia for general programming, rather than for computationally-intense programs.

The Strings section of the Julia Manual provides a very in-depth treatment of the considerations when using strings within Julia. For the purposes of my examples, there are only three things to know:

As part of my data engineering responsibilities at work, I often get requests to pull a sample of every table in a new database in our Hadoop cluster. This type of request is usually from the business owner, who wants to evaluate the data set has been imported correctly, but doesn’t actually want to write any sort of queries. So using the ODBC.jl package, I repeatedly do the same select * from <tablename> query and save to individual .tab files:

While the query is simple, writing/running this hundreds of times would be a waste of effort. So with a simple loop over the array of tables, I can provide a sample of hundreds of tables in .tab files with five lines of code.

In another task, I was asked to join a handful of Hive tables, then transpose the table from “long” to “wide”, so that each id value only had one row instead of multiple. This is fairly trivial to do using CASE statements in SQL; the problem arises when you have thousands of potential row values to transpose into columns! Instead of getting carpal tunnel syndrome typing out thousands of CASE statements, I decided to use Julia to generate the SQL code itself:

The example here only repeats the CASE statements five times, which wouldn’t really be that much typing. However, for my actual application, the number of possible values was 2153, leading to a query result which was 8157 columns! Suffice to say, I’d still be writing that code if I decided to do it by hand.

Like my ‘glue language’ post, I hope this post has shown that Julia can be used for more than grunting about microbenchmark performance. Whereas I used to use Python for doing weird string operations like this, I’m finding that the dollar-sign syntax in Julia feels more comfortable for me than the Python string formatting mini-language (although that’s not particularly difficult either). So if you’ve been hesitant to jump into learning Julia because you think it’s only useful for doing Mandelbrot calculations or complex linear algebra, Julia is just as at-home doing quick general programming tasks as well.

Maybe I Don't Really Know R After All

Lately, I’ve been feeling that I’m spreading myself too thin in terms of programming languages. At work, I spend most of my time in Hive/SQL, with the occasional Python for my smaller data. I really prefer Julia, but I’m alone at work on that one. And since I maintain a package on CRAN (RSiteCatalyst), I frequently spend my evenings bug fix programming in R. Then, there’s the desire to learn a Java-based language like Scala (or, Java)…maybe Spark for my Hadoop work…

So last night, when I ran into this series of follies with R, it really makes me wonder if I really understand how R works.

As part of the overall concept of my RSiteCatalyst package, I’m trying to make it as easy as possible for digital analysts to get their data via the Adobe Analytics API.  As such, I abstract away the need to build JSON to request reports and parse the API answer from JSON to a data frame. Sometimes it’s easy, but sometimes you get something like this:

In case it’s not clear what’s going on here, fromJSON() from jsonlite returns a data frame as best as it can, but we have a list (of data frames!) nested inside of a column named “breakdown”. There are 12 rows here, but the proper data structure would be to take the data frame inside of ‘breakdown’ and append all of the fields from the original 12 rows, repeating the values down the rows. So something like 72 rows (12 original rows, 6 row data frames inside of the ‘breakdown’ column).

Because this is such a small data frame, and because *apply functions are too frustrating in most cases, to parse this I went with the tried-and-true loop and accumulate. But instead of immediately getting what I wanted, I got this fantastic R error message:

Row names from a short variable? Off to StackOverflow, the savior of all language hackers, which lets me know I just need to add an argument to my cbind() function. Trying again:

So I successfully created an (84,10)-sized data frame, but cbind() allowed me to name two columns in the data frame “name”! Running ‘parsed_df$name’ at the REPL returns the first instance. So now, I have to use the unstable method of referring to the second ‘name’ column by position number if I want to access it (or, rename it using names() of course). The way I realized this behavior was occurring was that I tried to use plyr::rename and kept changing the name of two columns!

In order to get past my duplicate name issue, I eventually renamed the ‘name’ columns individually by each object, prior to cbind():

In the end, I found an answer to my solution, but it seems like every time I use R the more oddities I’m able to encounter/generate. At this point, I’m starting to question whether I really understand the underpinnings of how R works. It might be time to stop trying to be a language polyglot so much and focus on really learning a few of these tools in-depth.

Using Julia As A "Glue" Language

While much of the focus in the Julia community has been on the performance aspects of Julia relative to other scientific computing languages, Julia is also perfectly suited to ‘glue’ together multiple data sources/languages. In this blog post, I will cover how to create an interactive plot using Gadfly.jl, by first preparing the data using Hadoop and Teradata Aster via ODBC.jl.

The example problem I am going to solve is calculating and visualizing the number of airplanes by hour in the air at any given time in the U.S. for the year 1987. Because of the structure and storage of the underlying data, I will need to write some custom Hive code, upload the data to Teradata Aster via a command-line utility, re-calculate the number of flights per hour using a built-in Aster function, then using Julia to visualize the data.

Step 1: Getting Data From Hadoop

In a prior set of blog posts, I talked about loading the airline dataset into Hadoop, then analyzing the dataset using Hive or Pig. Using ODBC.jl, we can use Hive via Julia to submit our queries. The hardest part of setting up this process is making sure that you have the appropriate Hive drivers for your Hadoop cluster and credentials (which isn’t covered here). Once you have your DSN set up, running Hive queries is as easy as the following:

In this code, I’ve written my query as a Julia string, to keep my code easily modifiable. Then, I pass the Julia string object to the query() function, along with my ODBC connection object. This query runs on Hadoop through Hive, then streams the result directly to my local hard drive, making this a very RAM efficient (though I/O inefficient!) operation.

Step 2: Shelling Out To Load Data To Aster

Once I created the file with my Hadoop results in it, I now have a decision point: I can either A) do the rest of the analysis in Julia or B) use a different tool for my calculations. Because this is a toy example, I’m going to use Teradata Aster to do my calculations, which provides a convenient function called burst() to regularize timestamps into fixed intervals. But before I can use Aster to ‘burst’ my data, I first need to upload it to the database.

While I could loop over the data within Julia and insert each record one at a time, Teradata provides a command-line utility to upload data in parallel. Running command-line scripts from within Julia is as easy as using the run() command, with each command surrounded in backticks:

While I could’ve run this at the command-line, having all of this within an IJulia Notebook keeps all my work together, should I need to re-run this in the future.

With my data now loaded in Aster, I can normalize the timestamps to UTC, then ‘burst’ the data into regular time intervals. Again, all of this can be done via ODBC from within Julia:

Since it might not be clear what I’m doing here, the burst() function in Aster takes a row of data with a start and end timestamp, and (potentially) returns multiple rows which normalize the time between the timestamps. If you’re familiar with pandas in Python, it’s a similar functionality to resample on a series of timestamps.

Now that the data has been processed from Hadoop to Aster through a series of queries, we now have a much smaller dataset that can be loaded into RAM and processed by Julia:

The Gadfly code above produces the following plot: 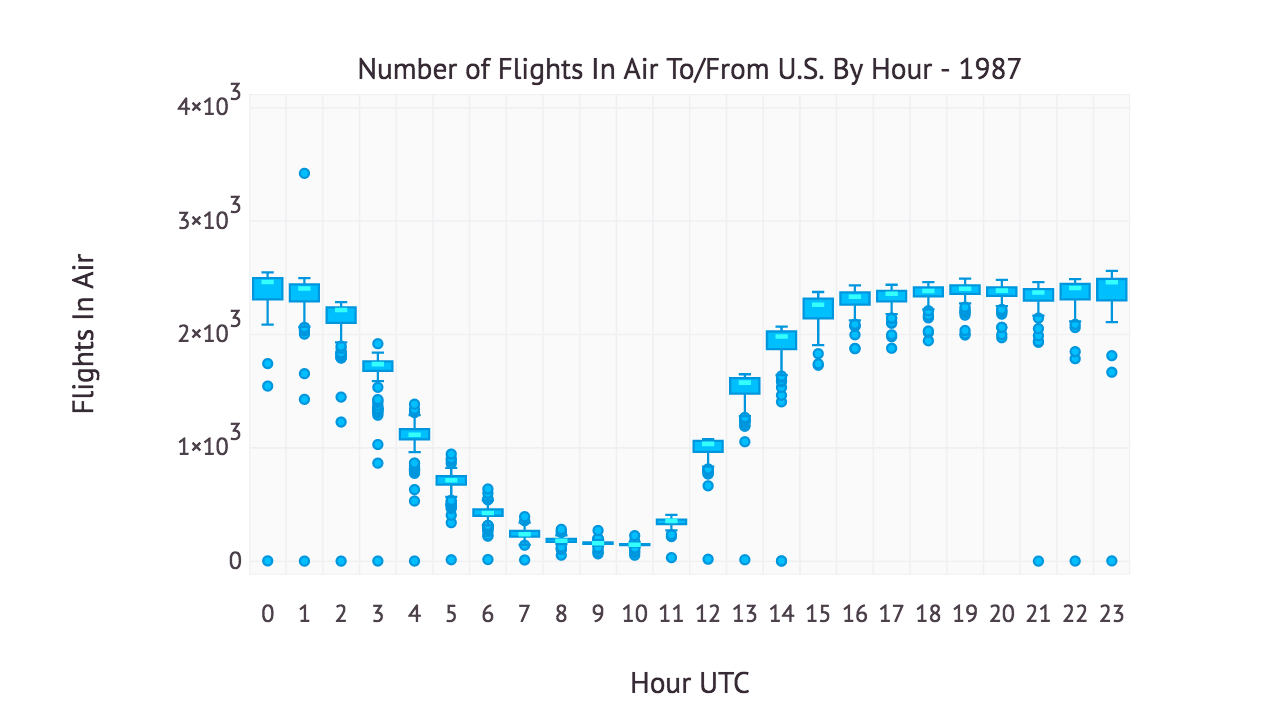 Since this chart is in UTC, it might not be obvious what the interpretation is of the trend. Because the airline dataset represents flights either leaving or returning to the United States, there are many fewer planes in the air overnight and the early morning hours (UTC 7-10, 2-5am Eastern). During the hours when the airports are open, there appears to be a limit of roughly 2500 planes per hour in the sky.

Why Not Do All Of This In Julia?

At this point, you might be tempted to wonder why go through all of this effort? Couldn’t this all be done in Julia?

Yes, you probably could do all of this work in Julia with a sufficiently large amount of RAM. As a proof-of-concept, I hope I’ve shown that there is much more to Julia than micro-benchmarking Julia’s speed relative to other scientific programming languages. You’ll notice that in none of my code have I used any type annotations, as none would really make sense (nor would they improve performance).  And although this is a toy example purposely using multiple systems, I much more frequently use Julia in this manner at work than doing linear algebra or machine learning.

So next time you’re tempted to use Python or R or shell scripting or whatever, consider Julia as well. Julia is just as at-home as a scripting language as a scientific computing language.